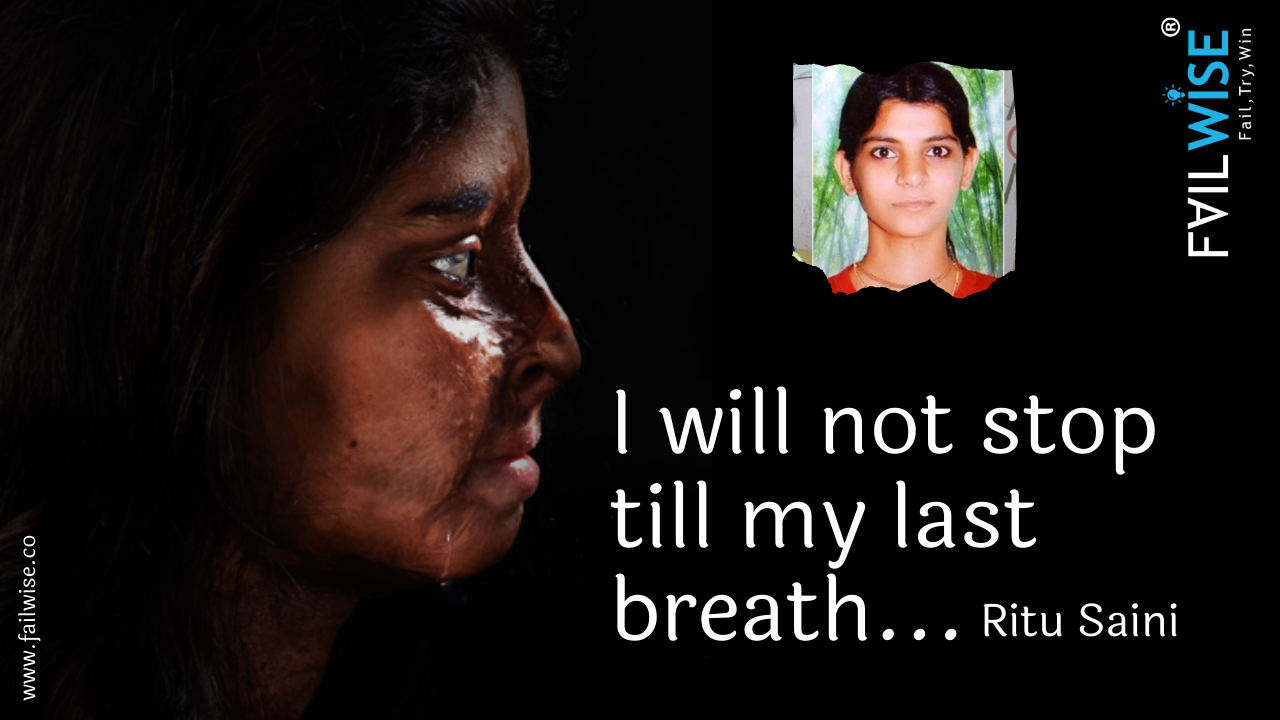 Why Should I Stop? Meet Ritu Saini. True Story of a Courageous Girl and Acid Attack Survivor | TUF Talk by FailWise

"The kind of beauty I want most is the hard-to-get kind that comes from within- strength, courage, dignity." — Ruby Dee

She never imagined that her own relative can be so ruthless with devilish intentions. Suffering from hell lot of pain, isolation, and trauma, she stood straight against all odds. Now she is helping many more girls and bringing a change in the society with her undiminishable will and courage. In this TUF talk we are featuring the most vibrant and brave girl, Ritu Saini who survived a deadly acid attack.

It happed on 26th May 2012 in Rohtak, Haryana, when State-level volleyball player Ritu (17 yr old at that time) was going for her daily volleyball practice session. “Suddenly two men on a motorcycle came towards her and threw acid on her face”, she says. It was indescribably painful, and no one came to help her. Then her brother, who was coming from a nearby Jagran (worship), saw her and took her to the nearest hospital. The effect was rapid, and acid dissolved her face, neck, shoulders, breasts, and hands; tissue, skin, flesh, and bone melted and fused.

After spending 10 days in ICU, later she was shifted to the regular ward and discharged after two months of treatment. Her eyes were glued due to burning and later she found that her eyesight of the left eye was completely gone.

“I was crying out pain and asking for help but no one came forward to help me. They were no other, but people of my society, who knew me. It so selfish mentality and this invites more crime, both indirectly and silently.”

Later they found that this attack was plotted by her own cousin brother who was 22 yr older than her and wanted to marry her. Dejected by rejection, he paid 1.25 lack Rs to someone for the acid attack on her.

After the attack, Ritu and her family started facing dire financial problems. They borrowed a lot of money to pay for the hospital bills, which landed them in deep amounts of debt.

For a middle-class family, it was very difficult to handle and started facing terrible financial difficulties. They borrowed lot of money from people and ended up in a heavy amount of debt. Eventually, they applied to the government for funds and got the treatment. Over the last 10 years, she went through more than 15 major operations and procedures. Her face was totally distorted, and doctors did multiple transplants and face restructuring surgeries.

It is not easy for parents and family members; they don’t know how to handle the situation. But it was a relief when after a total of 2 years in isolation, Alok Dixit, the founder of Chhanv Foundation (a non-profit organization, to rehabilitate acid attack survivors), and his team contacted her and her family in 2014. That was the time when she felt rejuvenated with positive energy. “When I saw more acid attack survivors and victims, I felt connected and that was my turning point, I was both excited and nervous”, she says.

She further mentioned “I learned very fast and started communicating my story. In return, I received so much love, affection, and support from society and members of the foundation.”

"I want a courageous heart, a heart that does the right thing even when it's afraid." — Lauren Gaskill

“Don’t give up, ask for help. You will get it, but you need to ask. I was determined. With a great mind and zeal, I started leading myself and working for the people like me. Joining such a mission gave me a totally different insight, specially not to take the revenge, but to handle the situation in a positive way.”- Ritu Saini

Being a fashion enthusiast, she started going for the ramp walks in fashion shows. In 2020 she was also featured in the Bollywood movie “Chhapaak”. She has shared her stories in 5-6 TED talks and also consulted with IAS officers at LBSNAA (Lal Bahadur Shastri National Academy Of Administration).

"Becoming courageous is the willingness to realize your true capacities by going through discomfort, fear, anxiety or suffering and taking wholehearted responsible action." — Ruth Schimel Ph.D.